Singapore, July 26, 2022 (GLOBE NEWSWIRE) — In the past, the scene of harvesting high value NFT and Cryptos by spending small amount might only exist in dream, the emergence of LuckyBuy, however, enables this dream to come true. As a passionate Web 3.0 builder, LuckyBuy has always adhered to the user-oriented principle, focusing on the common aspiration of users to cost small to reap big. There’s no denying that providing benefits to users is our mission and the inexhaustible driving force for our sustainable development. 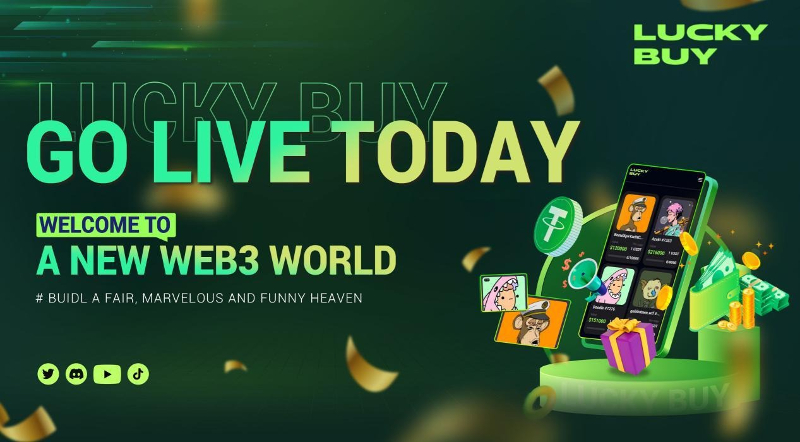 So, how do we make users realize their dream? The reason lies in the diversified settings online and offline, which greatly improve the liquidity of NFT, bringing greater benefits to our users.

A Coin, Gain the World

The basic logic of the online event lies in the opportunity to win large amount by costing small. For instance, only by spending 1U to participate in LuckyBuy, users are granted with the opportunity to win BAYC worth more than $100,000 or LuckyBox worth thousands of dollars. Apart from the basic mode of the game, it is noteworthy that the creative modes well designed by our team, including Lucky P2P, Lucky POC, Mystery Event, etc., also contribute to the liquidity of NFT products, which has become the source of benefits to our users.

As our events are constantly updated, it is highly recommended that users follow up our media, where rebate events would be announced in the near future to give feedback to our early buidler. Moreover, voting activities will be held to help with the launching of the favorite NFT of our community members.

In terms of the offline settings, a series of offline extensions in the near future are sure enough to bring about endless enjoyment. The vegetarian shop is set up for you to make healthy choice, while the coffee shop enables you to learn about the connotation of our culture, where you can use coffee cups of Azuki, eat cakes in the shape of Bored Ape as well as chocolate bean of Beanz.

The Art of Realizing Greater Liquidity and fair of NFT Products

How do LuckyBuy realize greater liquidity of NFT products? The first secret lies in the transparency and fairness guaranteed by blockchain technology. The second secret lies in gamification experience provided by the newly created gameplay like the LuckyP2P, which enables our users to sell their NFT in the way of luckybuy, while in the Lucky POC mode, genesis NFT is launched as a proof of early participants’ contribution (POC) to LuckyBuy, recording and proving users’ contribution in inviting new players, consumption and jointly governing the community. POC thus serves as a proof for users to receive airdrop and share profits of the platform in the future. The third secret is that the threshold of the game is rather low, granting every user with fair opportunity to enter the game.

Enjoy Never-ending Benefits in the Near Future

LuckyBuy announced that the fund for its investment project with IDG, KuCoin now in place. The fund is dedicated to improving product experiences for users and providing long-term, sustainable services.

The achievement of greater liquidity of NFT is one point, the realization of users’ dream is another, only by offering more benefits to our users will their dream become true. In the second half of 2022, we will issue NFT to reward early contributors to the LuckyBuy community. In 2023, we will have a series of airdrops, issue Pass cards and gift peripheral, and expand offline stores.

A big harvest with a small cost is the short term goal of us, while the long-term sustainable development is our ultimate goal, and thus we’re putting double the effort into delivering value to all of our users and it is always welcomed that the vast of users share with the benefits of our growth. Stay tuned for the brand new event of the platform!

IDG Capital is a world-renowned equity investment institution and a leading fund for blockchain ecological investment, which is valued at more than $100 million. It has invested in many well-known blockchain companies including Circle, Coinbase, Bitmain and Ripple.

Started in 2017, KuCoin is now a global cryptocurrency exchange with over 8 million users around the world. According to CoinMarketCap, KuCoin is the 6th largest crypto exchange with over 60 billion daily transaction volume. Also, Forbes named KuCoin as one of the Best Crypto Exchanges for 2021.

TALLINN , Aug. 09, 2022 (GLOBE NEWSWIRE) -- A survey conducted by CoinLoan revealed that most investors remain optimistic about...

WhiteBIT is to Present Its Own TokenKharkiv, Ukraine, Aug. 09, 2022 (GLOBE NEWSWIRE) -- WhiteBIT is a centralized European cryptocurrency...