Management Commentary
“We are now building Applied Blockchain to be the leading provider of next-gen datacenters that are designed to provide massive computing power,” said Applied Blockchain Chairman and CEO Wes Cummins. “We went from breaking ground to opening our first facility in under six months, demonstrating the capabilities of our operationally focused and experienced team. We also entered into a significant JV with Antpool, an affiliate of Bitmain, to build up to 1.5GW of co-hosting capacity. Our strong partnerships with companies like Bitmain validate our business model, which we expect to provide stronger risk-adjusted returns than many other cryptocurrency focused business models.”

“Our IPO enhanced our capital position to execute on our significant growth opportunities as we plan to grow our business to 800MW by May 2023, 1.8GW by the end of fiscal 2024 (ending May 31, 2024) and 5GW over the next five years. We see substantial demand for our services and in the near-term are laser focused on executing on our next facilities, including our first sites in Texas and expansion in North Dakota.”

Jamestown, North Dakota Co-Hosting Facility Update (100MW)
Applied Blockchain’s first co-hosting facility is in Jamestown, North Dakota with an initial planned capacity of 100MW. The site was purchased in August 2021 with construction beginning in September 2021. The first 55MW of capacity was brought online on February 2, 2022, with current operations at just over 80MW with the remaining 20MW to come online in the next few weeks. The entire 100MW of capacity has been fully contracted on multi-year contracts, providing revenue visibility for the Company.

The co-hosting facility is powered through a five-year energy services agreement with a local utility, providing visibility into the cost structure as a stable pricing mechanism for energy costs has been negotiated.

Future Co-Hosting Facilities Update
On November 24, 2021, Applied Blockchain entered into a letter of intent to develop a facility in Texas with 200MW of wind power. Construction of the facility began in April 2022 and is expected to be operational in the latter half of the calendar year.

The Company is also progressing on several additional co-hosting facilities including an additional Texas wind farm with targeted capacity of 200MW, which is expected to break ground in late fiscal first quarter 2023 or early fiscal second quarter 2023. In addition to the Texas sites, Applied Blockchain plans to be in construction on up to three other sites in three other states, including North Dakota, with total combined capacity of over 600MW before the end of calendar 2022.

Financial Results for Fiscal Third Quarter 2022 Ended February 28, 2022
Note: Applied Blockchain did not have operations in the prior year comparable period and thus no comparative analysis is included. Any reference to share count or per share metrics reflects the one-for-six reverse stock split that was effected April 12, 2022.

Revenues in the fiscal third quarter were $1.0 million, attributable entirely to the Company’s hosting business. Hosting revenue includes upfront payments which are recorded as deferred revenue. All such revenues were generated from its Jamestown, North Dakota facility.

Cost of revenues in the fiscal third quarter was $2.1 million, consisting primarily of electricity costs and including costs for Jamestown prior to the facility becoming operational. Other costs include personnel cost for employees directly working at the hosting facility and depreciation expense for equipment in service at the Jamestown hosting facility.

Operating expenses for the fiscal third quarter were $1.4 million, almost all of which were attributable to selling, general and administrative costs.

Net loss from continuing operations for the fiscal third quarter was $2.4 million, or ($0.04) per diluted share, based on a weighted average fully diluted share count during the quarter of 53.4 million.

Adjusted net loss from continuing operations for the fiscal third quarter was $2.0 million, or ($0.04) per diluted share, based on a weighted average fully diluted share count during the quarter of 53.4 million.

Net loss for the fiscal third quarter was $6.4 million, or ($0.12) per diluted share, based on a weighted average fully diluted share count during the quarter of 53.4 million.

Adjusted EBITDA, a non-GAAP measure, for the fiscal third quarter was ($1.7) million.

Liquidity and Capitalization
The Company’s current share count is approximately 99.2 million, which reflects its one-for-six reverse stock split, shares issued in the IPO and conversion of all of its previously outstanding preferred stock into common stock.

Applied Blockchain ended the fiscal third quarter of 2022 with cash and cash equivalents of $12.0 million and no debt. Subsequent to the end of the fiscal quarter, the Company closed its IPO, issuing 8.0 million shares of its common stock at $5.00 per share. Net proceeds received by Applied Blockchain were approximately $36 million.

On March 11, 2022, Applied Blockchain entered into a term loan agreement with Vantage Bank Texas for a $7.5 million, five-year loan at 5% interest. Proceeds from the loan will be used to fund the operations of its Jamestown site.

To participate, please dial the appropriate number at least ten minutes prior to the start time and ask for the Applied Blockchain conference call.

The conference call will broadcast live and be available for replay here.

About Applied Blockchain
Applied Blockchain Inc. (Nasdaq: APLD) is a builder and operator of next-generation data centers across North America which provide substantial compute power to blockchain infrastructure and support Bitcoin mining. The Company has partnered with the most recognized names in the industry to develop, deploy, and scale its business. Find more information at www.appliedblockchaininc.com. Follow us on Twitter at @APLDBlockchain.

Forward-Looking Statements
This release contains “forward-looking statements” as defined in the Private Securities Litigation Reform Act of 1995 regarding, among other things, future operating and financial performance, product development, market position, business strategy and objectives. These statements use words, and variations of words, such as “continue,” “build,” “future,” “increase,” “drive,” “believe,” “look,” “ahead,” “confident,” “deliver,” “outlook,” “expect,” and “predict.” Other examples of forward-looking statements may include, but are not limited to, (i) statements of Company plans and objectives, including our evolving business model, or estimates or predictions of actions by suppliers, (ii) statements of future economic performance, and (iii) statements of assumptions underlying other statements and statements about the Company or its business. You are cautioned not to rely on these forward-looking statements. These statements are based on current expectations of future events and thus are inherently subject to uncertainty. If underlying assumptions prove inaccurate or known or unknown risks or uncertainties materialize, actual results could vary materially from the Company’s expectations and projections. These risks, uncertainties, and other factors include: decline in demand for our products and services; the volatility of the crypto asset industry; the inability to comply with developments and changes in regulation; cash flow and access to capital; and maintenance of third party relationships. Information in this release is as of the dates and time periods indicated herein, and the Company does not undertake to update any of the information contained in these materials, except as required by law.

Applied Blockchain Consolidated Balance Sheets
(unaudited) (in thousands of dollars, except per share and per share amounts)

Applied Blockchain Consolidated Statement of Operations
(unaudited) (in thousands of dollars, except per share and per share amounts)

Applied Blockchain Consolidated Statements of Cash Flows
(unaudited) (in thousands of dollars, except per share and per share amounts)

Adjusted net loss and Adjusted EBITDA are not measurements of financial performance under GAAP and may not be comparable to other similarly titled measures of other companies. We use these measures as financial metrics to measure the financial performance of the business because management believes it provides additional information with respect to the performance of its fundamental business activities. For this reason, we believe these measures will also be useful to others, including its stockholders, as a valuable financial metric. 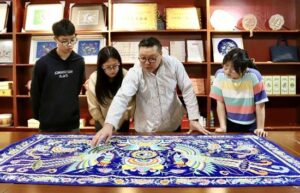