WISeKey’s WISe.Art and the China Museum of Finance extended their cooperation by creating the “MetaFi Museum,” which is not only a digital museum, but also a physical museum

The Jiaozi NFT was created by international renowned artist
Pedro Sandoval and Minted on WISe.ART

Geneva, Hong Kong: July 6, 2022 – WISeKey International Holding (“WISeKey”, SIX: WIHN, NASDAQ: WKEY), a Swiss global cybersecurity, AI, Blockchain, and IoT company today announced that it has extended its cooperation with The China Museum of Finance by creating the “MetaFi Museum,” which is not only a digital museum, but also a physical museum.

For the Inaugural launch of this cooperation, the WISe.ART platform will auction a historical NFT of the world’s first paper money created in China in 1024. https://finance.yahoo.com/news/wisekey-wise-art-china-museum-121900708.html 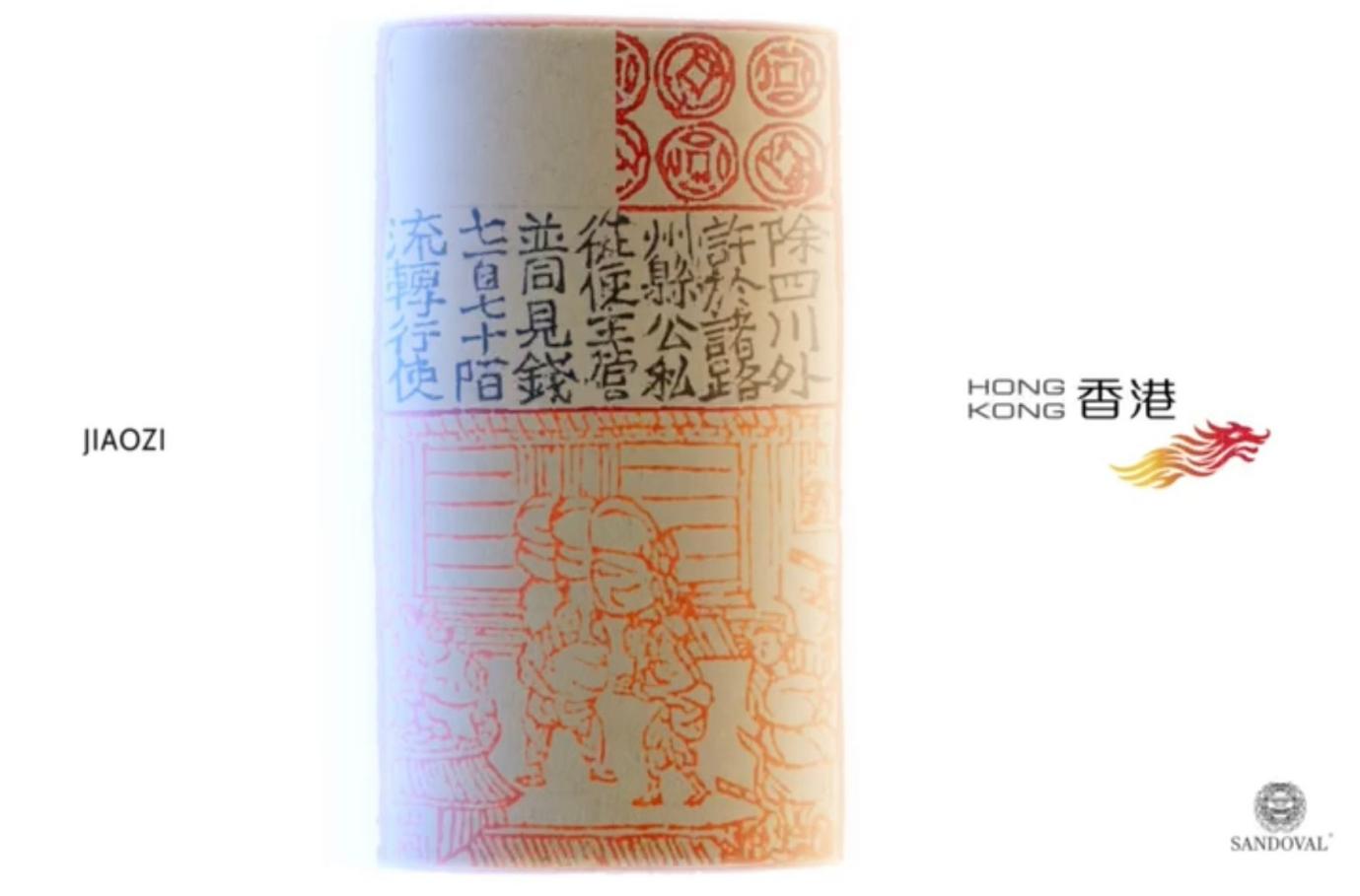 The Jiaozi NFT is the digital twin of the world’s first government-issued paper currency featuring elements of modern paper money for circulation management and reserve payment. The paper currency was issued on January 12, 1024, in Chengdu, Sichuan, China by the Jiaozi Affairs, the earliest central bank. The bank operated for more than 400 years. It would be almost 200 years later that Marco Polo introduced the concept of paper money to Europe, and 250 years more before Sweden issued modern paper money in 1661.
The China Museum of Finance is also preparing an NFT in cooperation with WISe.ART, the Gong silver dollar, minted by the Red Army in 1928. In particular, the unique historical significance of this silver dollar: the communist movement began in Europe and was always involved in the creation of the financial system.

China’s creation of paper money drew upon two of their other well-known inventions – papermaking and printing. Today, paper money is a core instrument of the global and national financial systems. Cryptocurrencies and NFT are also innovative developments in the history of 1,000 banknotes.

The China Museum of Finance has been promoting the spread of cross-border communication in China and the global financial industry, setting up Jiaozi exhibition halls and Jiaozi monuments in Chengdu, holding Jiaozi forums, and promoting applications for non-material cultural heritage.

The WISe.ART NFT platform is secured by WISeKey’s various security technologies enabling the authentication of digital identity based NFTs, physical objects as well as digital assets, in a safe end-to-end process. The user is in full control of its WISeID NFT and other NFTs need to request access to its identity information so WISeID NFTs users can decide by themselves what level of information they wish to share, thus keeping full control. The WISeKey approach to the Metaverse has as objective to provide safe infrastructure identity services based on blockchain technologies for a wide range of users, including individuals, corporations, and government institutions.

As our digital lives become increasingly digitalized, Metaverse will leverage the advantages of the internet to establish a virtual world for its users. Businesses and communities will depend on users’ digital identities to manage assets. As interest in NFTs continues to accelerate, WISeKey is committed to promoting a more environmentally friendly consumption and distribution model.

About the China Museum of Finance
The China Museum of Finance was registered in 2009 in Hong Kong, a consulting and management firm to promoting financial literacy and education in Asia. Working with several local government and financial institutions, it has helped creating and running over 11 financial museums in mainland China and Hong Kong, including the Tianjin Museum of Finance (2010), located on the site of the former French Club, a century-old European building, in Tianjin. Exhibits in the 2,400 sq. m. main hall included handwritten manuscripts by acknowledged father and founder of contemporary economics Adam Smith, Thomas Edison’s first light bulb, documents relating to the establishment of the Shanghai Stock Exchange, including directives from former premier Zhu Rongji, bonus stocks from the “cultural revolution” period, over 200 currencies from various historical epochs in China and overseas, financial bills, and financial artifacts. Many distinguished guests were present at the museum’s opening ceremony, and well-known Chinese financial celebrities. The success of this venture inspired Mr. Wang Wei to carry on in this vein. He has since built nine more financial museums within the past decade in Beijing, Shanghai, Chongqing, Suzhou, Ningbo, Shengyang, Chengdu, Zhengzhou and Jinggangshan.

The first known examples of paper currency as we would understand it today were created in China during the Song Dynasty (AD 960–1279). Promissory notes known as “Jiaozi” were printed by a group of merchants in Sichuan during the reign of Emperor Zhenzong (AD 997–1022).

WISeKey’s strategy in China is to integrate the combined technology stack for making WISe.ART available as a platform to build white-label marketplaces for different luxury collectibles and artwork. Part of this technology stack is the storage of the digital twins created as NFTs on the blockchain to enable the trading of these NFTs. To ensure KYC that still allows anonymity and the necessary exclusivity, all marketplaces created under the WISe.ART platform will allow the trading of NFTs.
Mr. Wang Wei has been a member of Shanghai Stock Exchange Corporate Governance Advisory Committee since 2007. He founded the China Museum of Finance in 2009, an organization that currently runs 11 museums across China.  He was founding Chairman of China Mergers & Acquisitions Association which has over 200 financial institutional directors and 6000 dealmakers manmber crosss boarder. He was also founding Chairman of Asia Mergers & Acquisitions Association (AMAA) and Co-chairman of International Federation of Finance Museums (IFFM) in November 2015. In January 2017, he became a director of the Board of the Global Blockchain Business Council (GBBC), founded by 25 countries.

Carlos Moreira, Chairman and CEO of WISeKey, commented, “We are delighted to join forces with the China Museum of Finance and Wang Wei. We look forward to working closely with him and benefit from his expertise as we expand our operations in China and among the NFT Metaverse community. WISeKey’s offering will allow brands, artists, fans, curators, owners, potential customers and liquidity providers investing in digital assets, to interact and grow on a secure, digital and scalable platform, thoroughly trace provenance, diminish counterfeiting on the digital sphere and integrate physical chip technology into real objects. Hence, WISeKey provides highly secure integration of the physical objects and their digital twins coined in NFTs. WISeKey is following a multichain strategy for its WISe.ART platform through a partnership with leading Chinese blockchain companies.”

Wang Wei added, “I am excited to work with a highly respected group of experts in the NFT.  As WISeKey is currently expanding its footprint to China, I am looking forward to assisting the team by bringing my knowledge and expertise in the Asian markets.”

About WISe.ART:
WISe.ART is a fully-fledged marketplace. It can connect all actors of the arts industry. Our white-labeling options and special NFT designs ensure that besides an authenticated and signed version of the actual digital asset, creating an irreversible link to the physical object, providing proof of ownership, provenance, and a set of smart contracts describing future use and monetization streams.

The WISe.ART NFT platform is fully secured by WISeKey’s innovative security technologies enabling the authentication of digital assets, in a safe end-to-end process based on our experience and proven expertise in this domain.

About WISeKey:
WISeKey (NASDAQ: WKEY; SIX Swiss Exchange: WIHN) is a leading global cybersecurity company currently deploying large scale digital identity ecosystems for people and objects using Blockchain, AI and IoT respecting the Human as the Fulcrum of the Internet. WISeKey microprocessors secure the pervasive computing shaping today’s Internet of Everything. WISeKey IoT has an install base of over 1.6 billion microchips in virtually all IoT sectors (connected cars, smart cities, drones, agricultural sensors, anti-counterfeiting, smart lighting, servers, computers, mobile phones, crypto tokens etc.).  WISeKey is uniquely positioned to be at the edge of IoT as our semiconductors produce a huge amount of Big Data that, when analysed with Artificial Intelligence (AI), can help industrial applications to predict the failure of their equipment before it happens.

Our technology is Trusted by the OISTE/WISeKey’s Swiss based cryptographic Root of Trust (“RoT”) provides secure authentication and identification, in both physical and virtual environments, for the Internet of Things, Blockchain and Artificial Intelligence. The WISeKey RoT serves as a common trust anchor to ensure the integrity of online transactions among objects and between objects and people.

Disclaimer:
This communication expressly or implicitly contains certain forward-looking statements concerning WISeKey International Holding Ltd and its business. Such statements involve certain known and unknown risks, uncertainties and other factors, which could cause the actual results, financial condition, performance or achievements of WISeKey International Holding Ltd to be materially different from any future results, performance or achievements expressed or implied by such forward-looking statements. WISeKey International Holding Ltd is providing this communication as of this date and does not undertake to update any forward-looking statements contained herein as a result of new information, future events or otherwise.
This press release does not constitute an offer to sell, or a solicitation of an offer to buy, any securities, and it does not constitute an offering prospectus within the meaning of the Swiss Financial Services Act (“FinSA”), the FInSa’s predecessor legislation or advertising within the meaning of the FInSA, or within the meaning of any other securities regulation. Investors must rely on their own evaluation of WISeKey and its securities, including the merits and risks involved. Nothing contained herein is, or shall be relied on as, a promise or representation as to the future performance of WISeKey.

EXolo was launched earlier this year and offers an easy-to-use platform which supports numerous tokens along with providing both spot...

Swap TC is excited to announce the launch of its data analytics platform, called SafeMarketCap. This move is the first...

Space Horizon revolutionizes the gaming and crypto Industry with its play-to-earn feature, Airdrop for beta testers, and other alluring features.Dubai,...